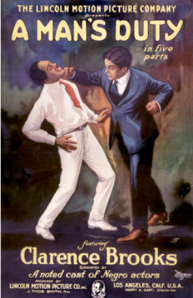 Synopsis:   Richard Beverly and Hubert Gordon are rivals for the affections of a beautiful woman.   A plan, contrived by Hubert to embarrass Richard in public, ends with the two spending a drunken night at a bordello. Learning of the trick the next day, Richard fights Hubert, who hits his head on a rock after Richard knocks him down. Richard, thinking that he is a murderer, leaves town and becomes a dissipated drunk in a distant city, where he meets Merriam Givens. Hoping to clear himself of disgrace so that he can marry Merriam, Richard writes home and learns that, although Hubert survived the accident, a prostitute is pregnant as a result of that night and believes Richard is the father. Will Richard do the right thing and marry the mother of his child, or will he follow his heart to be with his true love?

Notes:  This was the first feature-length production of the Lincoln Motion Picture Co., one of the leading black independent companies of the period. Source(s):  TCM.  Photo Source:  A Separate Cinema.