A New Meaning to Blood Relatives 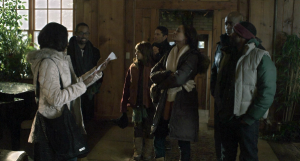 Five cousins, Karen, Henry, Lily, Tyrone, and Simpson, have been summoned by “The Elders” in their family for an impromptu family reunion at a remote mansion in the snowy woods. With the exception of Karen, a successful doctor who desires some family bonding time, the cousins assume they will soon receive their share of the family fortune, which dates back several generations. In particular, Simpson, hopes to make a business deal with The Elders and has brought along his bosses, a white couple named Martin and Julie.

Upon arriving at the mansion, the cousins learn that The Elders will not join them until the next day. Their mysterious Uncle Melvin thoughtfully provides a case of wine and a bag of weed. That night everyone is having a good time until Lily, seemingly possessed, goes into a wild dance then freaks out when she finds a bloody message, “the flesh is the strength” written on a window. After calming Lily down, everybody goes to bed. Later, as Martin and Julie are about to have sex, Julie is murdered and Martin disappears.

When Aunt Felicia arrives, she attempts to warn Lily about the family’s ties to the occult and the ominous events that lie ahead.

Eventually The Elders show up. Eccentric and clad in African attire, they sit the cousins down and Uncle Melvin tells them the family history. Centuries earlier, Chakabazz, a prophet and slave with supernatural abilities, promised his followers that he would lead them out of bondage and provide them with wealth as long as they offered him their children. He spares one child so the family line can continue, and proclaims that this blood sacrifice must continue with each generation. Back then, tradition was paramount, but today the cousins don’t take this story seriously, and wonder about their share of the family fortune. 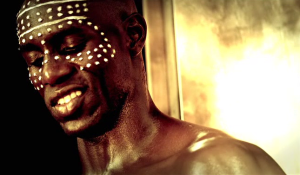 After the meeting with The Elders, cell phones stop working, doors start locking and the cousins realize that they are to be the next sacrifices to Chakabazz. Karen takes a bath, falls asleep and dreams of having sex with Chakabazz. African warriors begin attacking the cousins. Lily tries to escape by car, only to crash into a tree. When the others reach her, they find the body of Martin in the back seat.

Running blindly through the woods, the cousins stumble upon a bonfire where The Elders are calling Chakabazz to claim their sacrifice.

Eventually, only Karen and Simpson make it back to the mansion, and while Simpson tries to contact the outside world on his laptop, Karen, influenced by Chakabazz, kills him with an ax blow to the head.