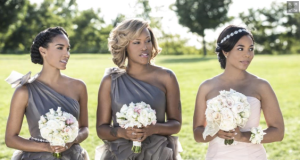 Synopsis:  After attending their friend Elise’s (Sudano) wedding to Nate (Bishop) on New Year’s Eve, Trista (Hall), a career-­driven talent agent, Viviane (Scott), a successful gossip columnist, and Amaya (Cooper), a struggling actress, make a pact to get married within the year to either a new love or a man waiting in the wings. But the close friends face their own set of challenges – Trista has not gotten over her commitment-­phobic ex-­boyfriend Damon (White), Viviane is secretly in love with Sean (George), the father of her son, and Amaya is desperate to break up her boyfriend Keith’s (Sanders) unhappy marriage so they can live happily ever after. Each woman starts the year with high hopes and dreams of what will happen over the next 12 months…but will they all make it to the altar?  Source:  Lifetime.

What the critics are saying about With This Ring:

New York Daily News: The dialogue and complex weave of relationships feel believable and natural. So even if the outcomes don’t feel like revelations, they feel right, and the trip to get there feels the same.  See full review at NYdailynews.com.

Shadow and Act:  Admittedly, a great deal of the film is comprised of Lifetime’s trademark cheesy clichés (poor choices made by these women, the usual rom-com high jinks, etc). There are dream sequences, for example, that simply don’t work, and the movie would’ve been better off without. But despite these flaws, and once you make the adjustment, writer/director Nzingha Stewart is able to keep the narrative contained, playing it to its strengths, exploiting its humor, with, for instance, surprisingly hilarious commentary on “weaves,” “aging ovaries,” as well as funny moments, including Trista’s awful dates with STD-riddled men, and wannabe vampires.

Ultimately, again, despite its expected Lifetime original movie fluffiness, the film does leave the viewer with some perspective. As Trista finds herself in a constant cycle of waiting for happiness, she finally comes to the realization that happiness has to start from within, which, in the end, is the point of it all.  “With This Ring” is a film about sisterhood and choosing happiness. Its cutesy and laugh-out-loud moments make it quite a bit of fun at times.  See full review at blogs.indiewire.com.

This is a movie where Jill Scott’s character has a literal heart attack because she finds out that her ex, who she’s been hoping to get back together with, has a girlfriend. It’s also a movie where Regina Hall’s character settles for her own ex when he asks her to marry him, even though a.) he’s awful, b.) he cheated on his fiancee with her, and c.) she’s been hanging out with a really nice guy who is clearly into her. So she’d rather settle on a guy she doesn’t even care about just to meet a fake deadline she’s set for herself than wait a little longer and have real happiness with a guy she actually likes. I understand that the whole point of the movie was for her to learn this lesson, but it certainly doesn’t cast women in a very flattering light.  See full review at crushable.com.

Note:  The content of this post is adapted from the primary sources as referenced above.  Click on the links to read the original reviews in their entirety.

1 reply to Critics’ Connection: With This Ring