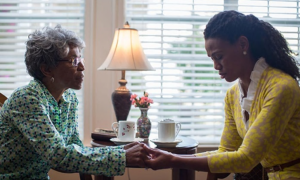 Tony and Elizabeth Jordan have it all-great jobs, a beautiful daughter, and their dream house. But appearances can be deceiving. Tony and Elizabeth Jordan’s world is actually crumbling under the strain of a failing marriage. While Tony basks in his professional success and flirts with temptation, Elizabeth resigns herself to increasing bitterness. But their lives take an unexpected turn when Elizabeth meets her newest client, Miss Clara, and is challenged to establish a “war room” and a battle plan of prayer for her family. As Elizabeth tries to fight for her family, Tony’s hidden struggles come to light. Tony must decide if he will make amends to his family and prove Miss Clara’s wisdom that victories don’t come by accident. Source: Rotten Tomatoes. Photo Source:  The Guardian.

What the critics are saying about War Room:

Variety:  Outside of evangelical circles, the names Alex Kendrick and Stephen Kendrick are likely to be met with blank stares. But thanks to low-budget hits like Fireproof and Courageous, the brothers have transformed themselves into Steven Spielbergs of Christian cinema. This drawing power was firmly on display when War Room, a celebration of the purpose-driven life, stunned box office watchers by nearly dethroning Straight Outta Compton as the weekend’s highest-grossing domestic release with its $11 million debut. That’s particularly impressive given that the religious drama was playing on a third of the number of screens as the N.W.A biopic.

Don’t count reviewers among the fans. War Room has a woeful 18% “rotten” rating on Rotten Tomatoes, with critics like the Los Angeles Times’ Michael Rechtshaffen dismissing the film as “mighty long-winded and wincingly overwrought.”

Alex Kendrick, a former pastor who handles directing duties on the brothers’ films, said “Critics in Hollywood are rough with us. They don’t understand why we make our movies or our worldview. But our target audience gets them and that’s who we want to draw closer to a walk with God.”  See full article at Variety.

The Wrap:  War Room may have crushed Zac Efron‘s We Are Your Friends at the box office… but critics were decidedly less friendly than audiences. Here are some of the harshest reviews about War Room:

Vadim Rizov from A.V. Club: “It’s innocuous enough fare, though it’s creepy to encourage women to believe the true source of their husbandly woes is Satan rather than an issue that probably needs to be discussed.”

Jim Judy from Screen It!: “The flick has a potentially dangerous ‘remedy’ to domestic abuse … it’s not up to Elizabeth to change or judge her husband, regardless of his behavior. Instead, she should respect, love, forgive, and pray for him, and let God do the rest. That’s all fine and dandy, but there are plenty of religious wives (and children) who’ve eventually been beaten and even killed by abusive husbands/fathers despite all of the prayers in the world.”

Kimberley Jones from Austin Chronicle: “I lodge no complaint against the film’s emphasis on prayer, even if, dramatically, it’s not scintillating stuff to watch. […] The filmmakers are upfront about their religious intent, and it follows that their audience is a targeted one. But the Kendricks have further limited that audience by presenting an emphatically anti-feminist picture of faith, repeatedly underscoring the idea that a woman must be submissive to her husband…”

See full review at The Wrap.

The Guardian:  War Room, is, unfortunately, nowhere near as entertaining as some other of the recent low budget evangelical Christian films. The performers are professional and, while it’s set in dull interiors with flat TV lighting, it cuts together okay. The plot is an uninteresting melodrama with a tortoise’s pace, but this does allow the viewer plenty of time to scrutinize its odd logic. Elizabeth (Priscilla Shirer, a successful Christian minister in her first film role) is a hard-working real estate agent aware that her marriage is almost at its breaking point. Her no-nonsense new client Miss Clara (Karen Abercrombie) wants to talk less about selling her house and more about Elizabeth’s relationship with Jesus. Miss Clara explains how she found happiness. She turned her walk-in closet into a war room, and there she sat and prayed and prayed. After a lengthy period of consideration, Elizabeth follows suit.  It was good timing, too, as her no-good husband Tony (T.C. Stallings) was just about to shack up with a work associate.

Shirer and Stallings do the best they can with the material, and while Miss Clara is about as subtle as Tyler Perry’s Madea, Karen Abercrombie’s furniture-chomping performance does sneak a laugh or two.  See full review at The Guardian.

The Christian Broadcasting Network:  War Room is a movie that serves as a powerful reminder of the impact that prayer can have on our everyday lives. It is a poignant example of God’s willingness to extend grace and mercy to us even when we feel like we don’t deserve it. Faith, family, and the power of prayer on the big screen … well worth the price of admission. See full review at CBN.com.