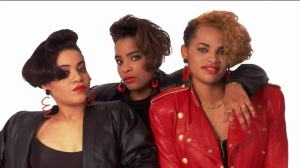 Details:  Salt-N-Pepa will tell the story of nursing students Cheryl “Salt” James and Sandra “Pepa” Denton, who fell into the world of rap and hip hop, after recording for a friend’s school project. One of the first all-female rap groups, the series will look at the pair who were unafraid to talk about sex and share their thoughts on men. The series will feature their greatest hits including “Let’s Talk About Sex”, “What a Man”, “Shoop” and “Push It”. It will be exec produced by Cheryl James, Sandra Denton and Jesse Collins as well as Queen Latifah and Shakim Compere from Flavor Unit. Written by Abdul Williams with Andy Horne, Dionne Harmon and James “Jimmy” Maynes as co-exec producer.  Source:  Deadline; Photo Source:  BBC.