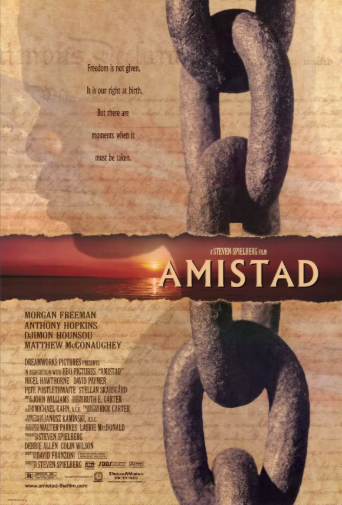 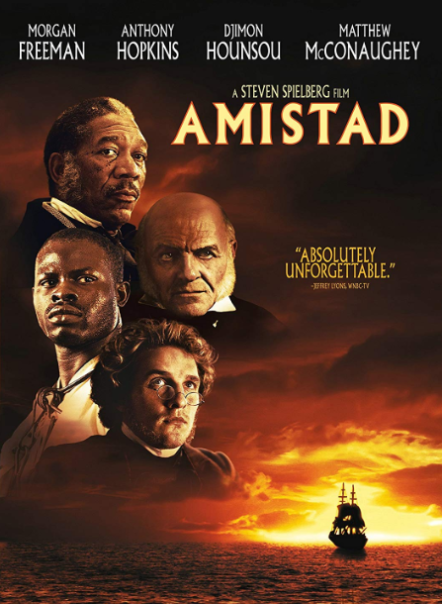 Details:   Amistad is a historical drama film based on the true story of the events in 1839 aboard the slave ship La Amistad, during which Mende tribesmen abducted for the slave trade managed to gain control of their captors’ ship off the coast of Cuba, and the international legal battle that followed their capture by the Washington, a U.S. revenue cutter. The case was ultimately resolved by the U.S. Supreme Court in 1841.  Based on the book Mutiny on the Amistad: The Saga of a Slave Revolt and Its Impact on American Abolition, Law, and Diplomacy (1987). Story:  La Amistad is the name of a slave ship traveling from Cuba to the United States in 1839 and carrying African slaves as its cargo. As the ship is crossing from Cuba to the United States, Cinqué, head of the Africans, leads a mutiny and takes over the ship. The mutineers spare the lives of two Spanish navigators to help them sail the ship back to Africa. Instead, the navigators misdirect the Africans and sail north to the east coast of the United States, where the ship is stopped by the American Navy, and the living Africans imprisoned as runaway slaves.

In an unfamiliar country and not speaking a single word of English, the Africans find themselves in a legal battle. United States Attorney William S. Holabird brings charges of piracy and murder. Secretary of State John Forsyth, on behalf of President Martin Van Buren (who is campaigning for re-election), represents the claim of Queen Isabella II of Spain that the Africans are slaves and are property of Spain based on a treaty.  At the time the Queen was ten years old and living in exile in Rome with her mother Maria Christina of the Two Sicilies while Spain was under the liberal regency of Baldomero Espartero and the government of prime minister Antonio González. Two Naval officers, Thomas R. Gedney, and Richard W. Meade, claim the Africans as salvage while the two Spanish navigators produce proof of purchase. A lawyer named Roger Sherman Baldwin, hired by the abolitionist Lewis Tappan and his black associate Theodore Joadson, decide to defend the Africans. 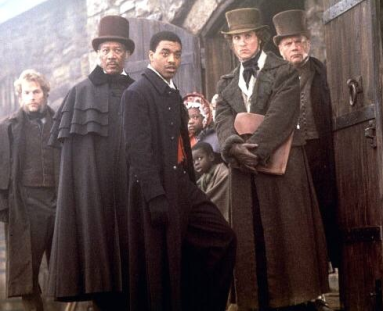 Baldwin argues that the Africans had been captured in Africa to be sold in the Americas illegally. Baldwin proves through documents found hidden aboard La Amistad that the African people were initially cargo belonging to a Portuguese slave ship, the Tecora. Therefore, the Africans were free citizens of another country and not slaves at all. In light of this evidence, the staff of President Van Buren has the judge presiding over the case replaced by Judge Coglin, who is younger and believed to be impressionable and easily influenced. Consequently, seeking to make the case more personal, on the advice of former American president (and lawyer) John Quincy Adams, Baldwin and Joadson find James Covey, a former slave who speaks both Mende and English. Cinque tells his story at trial, how he was kidnapped by slave traders outside his village, and held in the slave fortress of Lomboko, where thousands of captives were held under heavy guard. Cinque and many others were sold to the Tecora, where they were held in the brig of the ship. The captives were beaten and at times, were given so little food that they had to eat the food from each other’s faces. One day, 50 captives were thrown overboard. Later, the ship arrived in Havana, Cuba. Those captives that were not sold at auction were handed over to La Amistad. 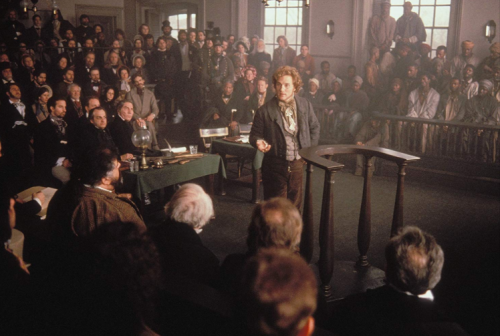 United States Attorney Holabird attacks Cinqué’s tale of being captured and kept in the slave fortress, and especially questions the throwing of precious cargo overboard. Holabird contends that Cinque could have been made a debt slave by his fellow Sierra Leoneans. However, the Royal Navy’s fervent abolitionist Captain Fitzgerald of the West Africa Squadron backs up Cinqué’s account. Baldwin shows from the Tecora’s inventory that the number of African people taken as slaves was reduced by 50.  In the Tecora’s case, they had underestimated the amount of provisions necessary for their journey.  As tension in the courtroom rises, Cinqué stands up from his seat and repeatedly cries, “Give us, us free!” 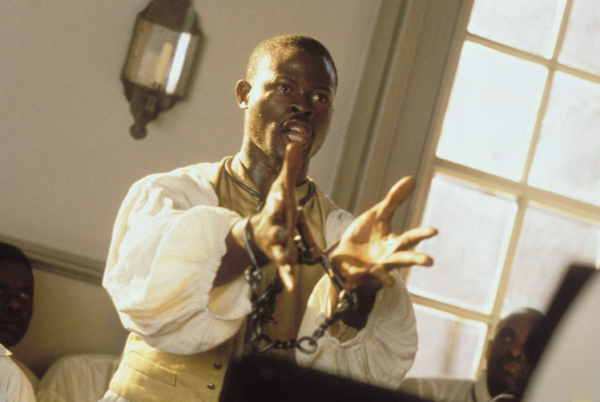 Judge Coglin rules in favor of the Africans. After pressure from Senator John C. Calhoun of South Carolina on President Van Buren, the case is appealed to the Supreme Court. Despite refusing to help when the case was initially presented, Adams agrees to assist with the case. At the Supreme Court, he makes an impassioned and eloquent plea for their release, and is successful.  Because of the release of the Africans, Van Buren loses his re-election campaign, and tension builds between the North and the South, which eventually culminates in the Civil War.  Source:  Wikipedia; IMDB; Collider.