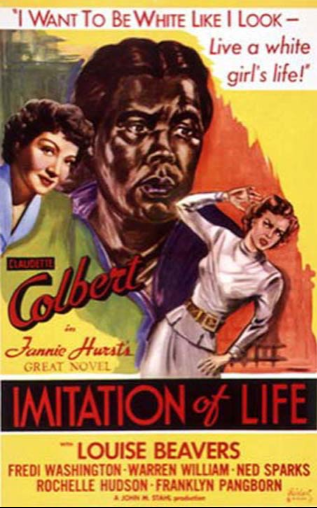 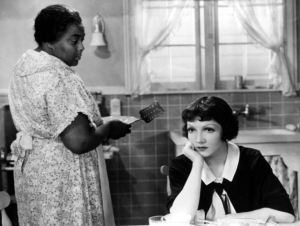 Story:  White widow Bea Pullman and her two-year-old daughter Jessie are having a rough morning. Jessie doesn’t want to go to the day nursery but she must because her mother is trying to continue her husband’s business, selling heavy cans of maple syrup door to door, and making very little money. Black housekeeper Delilah Johnson is also having a bad morning. She misread an advertisement and came to the wrong house—Bea’s.  Delilah explains that no one wants a housekeeper with a child, and introduces her daughter Peola, whose fair complexion hides her African American ancestry. Bea can’t begin to afford help, so Delilah offers to keep house in exchange for room and board. The four quickly become a family. They all particularly enjoy Delilah’s pancakes, made from a secret family recipe. 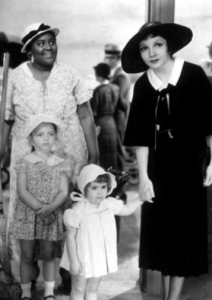 Bea uses her business wiles to get a storefront and living quarters on the boardwalk refurbished on credit, and they open a pancake restaurant where Delilah and Bea cook in the front window.  Five years later, they are debt-free. The little girls are good friends, but one day Jessie calls Peola black. Peola runs into the apartment declaring that she is not black, won’t be black, and that it is her mother who makes her black. Cradling her weeping daughter, Delilah tells Bea that this is simply the truth, and Peola has to learn to live with it. Peola’s father, a light-skinned African American, had the same struggle, and it broke him. Delilah receives another blow when she finds out that Peola has been “passing” at school.

One day, a hungry passerby, offers Bea a two-word idea in exchange for a meal: “Box it.” Bea hires him, and they set up the hugely successful Delilah’s Pancake Flour business. Delilah refuses to sign the Incorporation papers, and when Bea tells her that she can now afford her own home, Delilah is crushed. She does not want to break up the family. So the two friends continue to live together, and Bea puts Delilah’s share in the bank. 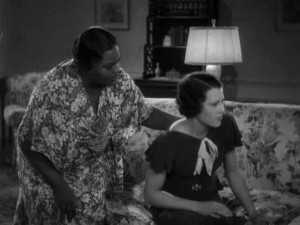 Ten years pass. Both women are wealthy and share a mansion in New York City. Delilah  becomes a mainstay of the African-American community, supporting many lodges and charitable organizations and her church.  She tries to give Peola every advantage, including sending her to a fine Negro college in the South, but Peola runs away.

Meanwhile, Elmer arranges for Bea to meet a handsome ichthyologist, Stephen Archer.  They hit it off immediately and plan to marry. Then eighteen-year-old Jessie comes home on college vacation, and during the five days it takes for Bea and Delilah to find Peola, she falls in love with Stephen. 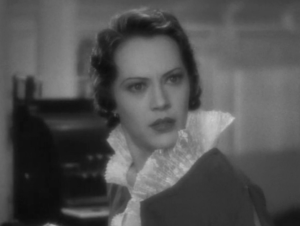 Peola has taken a job in a segregated restaurant in Virginia. When her mother and Bea find her, she denies Delilah. Delilah can give her everything that money can buy, but she can’t change who she is.  Peola finally tells her mother that she is going away, never to return, so she can pass as a white woman—and if they meet on the street, her mother must not speak to her. Delilah is heartbroken and takes to her bed, murmuring Peola’s name and forgiving her before eventually dying of a broken heart. 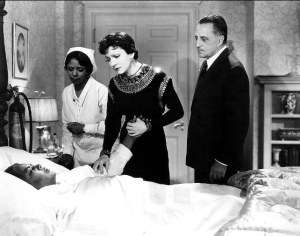 Delilah has the grand funeral she always wanted, with marching bands, a horse-drawn white silk hearse, and all the lodges processing in a slow march. The coffin is carried from the church to the hearse through the saber arch of an honor guard, and a remorseful, sobbing Peola rushes to embrace it, begging her dead mother to forgive her. Bea and Jessie gather her into their arms and take her into the car with them.  Peola decides to return to college. Bea asks Stephen to wait, promising to come to him after Jessie is over her infatuation. At the end, Bea starts to tell Jessie about the day they met Delilah. 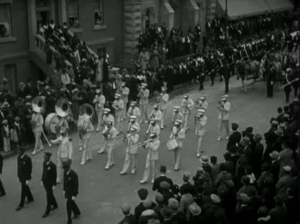 Details:  The screenplay was based on Fannie Hurst’s 1933 novel of the same name.  The film was originally released by Universal Pictures on November 26, 1934, and later re-issued in 1936. A 1959 remake with the same title was directed by Douglas Sirk.  In 2005, Imitation of Life was selected for preservation in the United States National Film Registry, being deemed “culturally, historically, or aesthetically significant”. It was also named by Time in 2007 as one of “The 25 Most Important Films on Race”.

Universal had difficulty receiving approval from the censors at the Hays Office for the original script they submitted for Imitation of Life.  The elements of miscegenation in the story, were objected to, which the Office stated, “not only violates the Production Code but is very dangerous from the standpoint both of industry and public policy.”  The project was rejected as, “Hurst’s novel dealing with a partly colored girl who wants to pass as white violates the clause covering miscegenation in spirit, if not in fact!” The Production Code Administration’s (PCA) censors had difficulty “negotiating how boundaries of racial difference should be cinematically constructed to be seen, and believed, on the screen.” Their concern was the character of Peola, in whose person miscegenation was represented by a young woman considered black, but with sufficient white ancestry to pass as white and the desire to do so. Susan Courtney says that the PCA participated in “Hollywood’s ongoing desire to remake interracial desire, a historical fact, as always already having been a taboo.”  They also objected to some language in the script, and a scene where a black young man is nearly lynched for approaching a white woman whom he believed had invited his attention.  Ultimately the ending of the film differed from the novel. While Peola leaves the area never to return in the latter, in the former she returns, going to her mother’s funeral and showing remorse.  Source(s):  Wikipedia; IMDB; Themotionpictures.net; Ferdyonfilms.com.