Details:  Two black police detectives suspect a preacher’s “Back to Africa” movement is a scam.  The film is based on Chester Himes’ novel of the same name.  It was followed two years later by the sequel Come Back, Charleston Blue.

Story:  Cotton Comes to Harlem opens with a Back-to-Africa rally, led by the charismatic conman Reverend Deke O’Malley. O’Malley persuades hardworking families to pay $1,000 for the chance to return to Africa and escape white oppression. Deke raises $87,000, but before he can pocket the money, a group of masked white men hijack the money and flee the scene in a meat truck.  O’Malley follows in an armored car, himself pursued by black police detectives Coffin Ed Johnson and Grave Digger Jones.  During the pursuit, a bale of cotton, in which the hijackers hid the money, falls off the back of the truck and disappears onto the streets of Harlem. A junkman named Uncle Bud finds the cotton and stacks it onto his cart.

Back-to-the-Southland opens its headquarters in Harlem.  The business is run by Colonel Calhoun, a Southerner who wants to convince black people to return to the South and pick cotton. Calhoun believes blacks need the steadying hand and guidance of whites to show them the way.  The headquarters advertises for a bale of cotton as Calhoun was behind the theft of the money during the rally.

Grave Digger and Ed take on the case.  Unaware of the missing bale of cotton or its significance, the detectives pursue Deke, who is in hiding, suspecting that he may have staged the hijacking to take off with the $87,000.  They pursue leads that might led them to either the conman or the missing money with the help of “pigeons” (police informants), prostitutes, drug runners, and conmen.

Eventually the cotton ends up with Billie, an exotic dancer who intends to use it as a prop in her show. As she begins her act in Harlem’s Apollo Theater, Calhoun in blackface and O’Malley appear onstage in an effort to get to the cotton and the money. In doing so, the two are exposed and arrested by Coffin Ed and Grave Digger.

The detectives subsequently coerce a Mafia Don to compensate O’Malley’s disgruntled congregation for the elusive $87,000.  Grave Digger and Coffin Ed learn that Uncle Bud absconded to Africa with the money, where he is enjoying a new lifestyle. 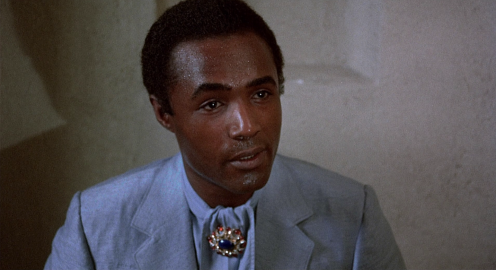 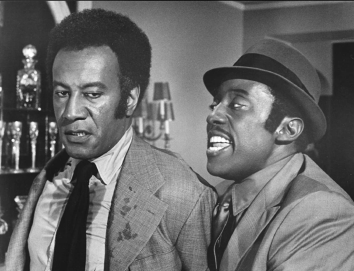 Notes:  Cotton Comes to Harlem saw the film debut of Judy Pace, and Cleavon Little. It was also the credited debut of Redd Foxx, who was already well-known as a veteran night club comic, leading him to be considered for the TV Show Sanford and Son. Cambridge also starred as a white man who turns black in the motion picture comedy Watermelon Man, which opened the same day as Cotton Comes to Harlem.  The film’s inspirational opening theme song, “Ain’t Now But It’s Gonna Be,” was written by Ossie Davis and performed by Melba Moore.  Source(s):  supersummary.com; tcm.com; blaxploitationpl.blogspot; daarac.org.  Photo Sources/gifs:  IMDB; daarac.org; tumbler; youtube.