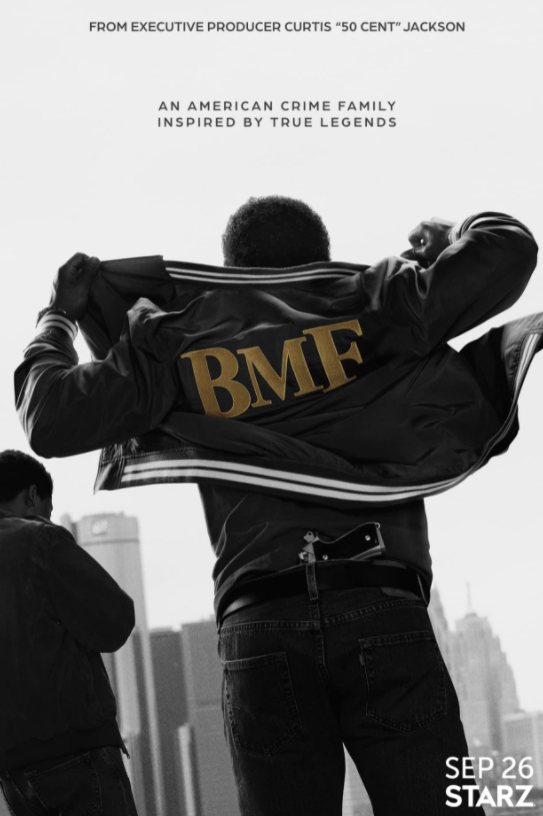 Story:  Black Mafia Family is inspired by the true story of two brothers who rose from the decaying streets of southwest Detroit in the late 1980’s to give birth to one of the most influential crime families in the country.  Demetrius “Big Meech” Flenory’s charismatic leadership, Terry “Southwest T” Flenory’s business acumen and the fraternal partnership’s vision beyond the drug trade and into the world of Hip Hop would render the brothers iconic on a global level.

In addition to launching a cocaine empire infamously known as the Black Mafia Family, the Flenory brothers also entered the music industry as a way to curry favor, create a legitimate business and launder money. The financial foray further helped the Black Mafia Family become one of the most famous, flashy and mythicized crime organizations in America. The Flenorys promoted hip-hop artists such as Fabolous and Young Jeezy as a part of their music business.  But that level of prestige for the Black Mafia Family happened in the early 2000s. The series will break down their origin story growing up on Detroit’s rugged Southwest side as their oversized ambitions and dreams took them to unthinkable but nefarious heights. The drama also unpacks how the once incredibly close and loving brothers eventually became estranged.

Cast:  Flenory Jr.’s “Big Meech” is a charming and ambitious Detroit legend-in-the-making, who becomes the face of the operation. Hungry for his slice of the American dream, Meech quickly advances from a corner boy to a mid-level man, who knows when to use the carrot or the stick as he and his brother set out to become the Kings of Detroit.

Da’ Vinchi’s Terry “Southwest T” Flenory is the quiet and calculating brains behind the scene. Terry is torn between two competing identities: being a new father and becoming the first male in their family to graduate high school, or tight-roping as a serendipitous dealer who must protect his brother from himself as well as secure their safety.

Wood Harris will play Pat, the revered O.G. who gives Meech and Terry their first shot in the game. He instills a family first attitude that the Flenorys adopt until they begin to outshine their mentor and pursue their own independence.

Michole Briana White will play Lucille, the strong-willed, dignified mother of Demetrius and Terry Flenory.  Lucille is a devout Christian who does everything she can to protect her marriage on one hand, and her sons on the other, while navigating the toughest storm of their life.

Ajiona Alexus will portray Kato, the fierce and ambitious corner girl in Meech and Terry’s crew. Kato is a brilliant and troubled young woman, and the Flenory brothers are the first to treat her like family. She wants to prove her trust and do right by them, but she has a secret that could get everyone killed.

Eric Kofi-Abrefa is Lamar. A cross between a serial killer and a court jester, Lamar is an erratic street legend whose unbelievable stories of conquest are part of hood lore. Lamar returns to Southwest Detroit to reclaim his turf and his lady. But Demetrius Flenory is occupying both, forcing a battle between old school and new.

Myles Truitt will play B-Mickie, the third OG in Meech and Terry’s drug crew. A laid-back, philosophizing stoner who marches to the beat of his own drum, B-Mickie is getting tired of taking orders from the Flenorys, especially when he knows he could do better.

The iconic Snoop Dogg will play “Pastor Swift,” the Flenory family’s spiritual advisor. He’s a man of The Word, with the aura of an ex-con. The Pastor believes in the power of the Lord, and does his best to keep Meech and Terry in good graces. But Pastor Swift eventually ingratiates himself into every part of the Flenory’s life, including helping find a lawyer, and becoming a confidante. Meech and Terry’s father resents all the attention the Pastor showers over the Flenory’s family, but no one can deny all the good the Pastor does for them.

La La Anthony will play “Markaisha Taylor,” the wife of a flamboyant drug dealer that Meech and Terry befriend. She sees something in Terry, a seriousness and a sense of purpose she feels she can harness to make herself rich and powerful. She develops a friendship with him and his confidant and eventually, his lover, putting everything Terry has built out on the streets at stake.

Serayah will play Demetrius Flenory’s girlfriend, “Lori Walker,” who is also the mother of his child “Neeka.” Walker is a smart, driven, yet naive college athlete who once fell for Meech’s bad boy charm. Walker is more mature and clear-eyed now. Her world centers more around her daughter, and she expects less out of Meech, which makes him want her more.