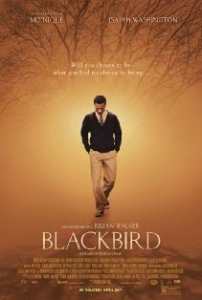 Story:  Blackbird revolves around a dysfunctional family in a religiously conservative small Mississippi town. After the young daughter goes missing, the family begins to fall apart. The son, played by newcomer Julian Walker, is a star singer in the church choir, but later comes to realize he is gay – something that does not settle well with the Baptist community. Ridiculed by his mother (Mo’Nique) and supported by his father (Isaiah Washington), the family struggle to stay together as one.

Details:  As reported in Deadline on January 6, 2014, this is Mo’Nique’s first screen starring turn since the ferocious portrayal as an abusive mother in 2009′s Precious won her the Best Supporting Actress Oscar. Patrik Ian Polk-directed Blackbird, an adaptation of the novel by Larry Duplechan.  Mo’Nique is also exec producer with her husband, Sidney Hicks, through Hicks Media. Newcomer Julian Walker plays the star singer in the church choir who feels like a misfit in his high school and struggles with his sexual awakening and the realization he is gay, something that doesn’t land well in a religiously conservative small Mississippi town. This coincides with his younger sister going missing and his parents splitting up. Mo’Nique plays another character who’s not going to win mother of the year awards: the youth’s heartbroken mom, who blames her son’s lifestyle revelation for his sister going missing. Washington plays his supportive father trying his best to help his son’s transition to manhood.  (Source(s): Movie Pilot, Deadline).