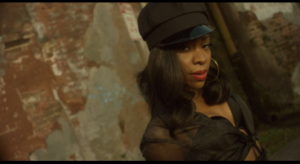 Story:  Teyonah Parris stars in the TV One Original Movie The Miki Howard Story. Parris plays the R&B/Jazz singer and actress who enjoyed mainstream success in the late 1980s and early 1990s, with a string of top 10 hits including “Come Share My Love,” “Baby, Be Mine,” “Love Under New Management,” and others.

The film will cover 30+ years of Howard’s life, including both professional and personal trials and triumphs.  Also starring Darius McCrary as Gerald Levert, Gary Dourdan as Augie Johnson, LisaRaye is Sylvia Rhone, Amari Cheatom as Eddie Phelps and Vanessa Bell Calloway as Josephine Howard.  Christine Swanson is directing from a script written by Rhonda Baraka, which is based on a yet to be released biography by Miki Howard.  Source:  Shadow and Act.