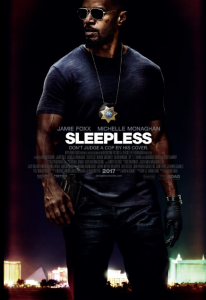 Story:   In this Sin City thriller, Las Vegas cop Vincent Downs finds himself trapped between corrupt cops and the mob underground.  When a heist goes bad, Downs’ son is snatched from his car by a group of armed men who demand the money they would have made from the robbery in exchange for returning Downs’ son alive. Meanwhile, he’s also dealing with an internal affairs investigation while trying to retrieve his son and get even with the kidnappers — all in one long night.  Downs’ mission takes him through the city’s maze of parking garages and nightclubs and has him driving sports cars through the city and engaging in hand-to-hand combat in the bowels of a casino.  Sleepless is a remake of the 2011 French film Sleepless Night.  Source:  The Wrap.