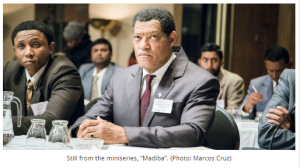 Story:  A three-part saga telling the “definitive story” of Nelson Mandela.  Madiba, based on two Mandela autobiographies, Conversations with Myself and Nelson Mandela by Himself, tells the most personal and comprehensive story of Mandela’s life, focusing on the man, and his innermost thoughts and fears as he fought and sacrificed for freedom to become an international icon. While many recognize Mandela as the face of the Anti-Apartheid Movement, this mini-series also pays homage to the many lesser known men and women who sacrificed and suffered alongside him in South Africa’s quest for freedom.  Along with detailing the early years of Mandela’s personal journey, Madiba also reveals the behind-the-scenes strategizing and bold organizing tactics he and his collaborators used to bring attention to their movement both domestically and internationally.  Source/Photo:  Shadow & Act.