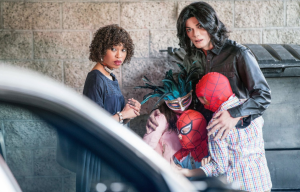 Story:  Based on the best-selling book, Remember the Time: Protecting Michael Jackson in His Final Days, and told through the eyes of Jackson’s trusted bodyguards, Bill Whitfield and Javon Beard. The movie will reveal firsthand the devotion Michael Jackson had to his children, and the hidden drama that took place during the last two years of his life.  Source:  Lifetime.