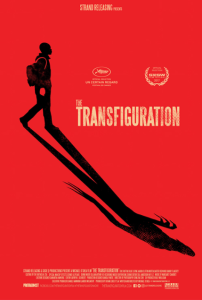 Story:  The Transfiguration follows troubled teen Milo who hides behind his fascination with vampire lore. When he meets the equally alienated Sophie, the two form a bond that begins to challenge Milo’s dark obsession, blurring his fantasy into reality. A chilling portrait of violence, The Transfiguration is an atmospheric thriller set against the grit of New York City.  Source:  Official Site.