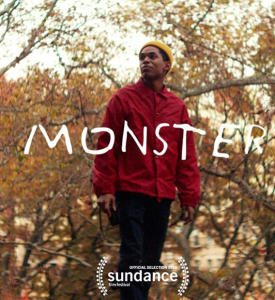 Story:   Steve Harmon, a bright, sensitive 17-year-old, stands trial for acting as a lookout during the lethal armed robbery of a Harlem bodega. Before his arrest, he was an honors student and aspiring filmmaker taking street-level snapshots and on-the-fly footage of neighborhood life. Now, Steve is seen as just another young black criminal, assumed guilty and labeled a monster. But Steve and his lawyer declare his innocence and attempt to defy the odds in a bid to win his freedom.  Source:  Sundance.org; Photo Source:  IMDB.

Update:   On April 22, 2019, Deadline reported that Entertainment Studios Motion Pictures has acquired worldwide rights to All Rise, the drama written and directed by Anthony Mandler that premiered at the 2018 Sundance Film Festival as Monster. The pic based on Walter Dean Myers’ New York Times-bestselling novel of that name is now headed for a fall 2019 domestic theatrical release.

The plot centers on Steve Harmon (Kelvin Harrison, Jr.), a 17-year-old honor student whose world comes crashing down when he is charged with felony murder. The film follows his dramatic journey from a smart, likeable film student from Harlem attending an elite high school through a complex legal battle that could leave him spending the rest of his life in prison.  Source:  Deadline.