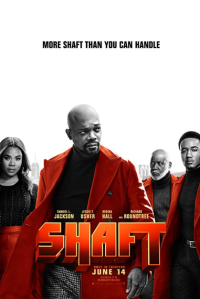 Story:  JJ, aka John Shaft, Jr. (Usher), may be a cyber security expert with a degree from MIT, but to uncover the truth behind his best friend’s untimely death, he needs an education only his dad can provide. Absent throughout JJ’s youth, the legendary locked-and-loaded John Shaft (Jackson) agrees to help his progeny navigate Harlem’s heroin-infested underbelly. And while JJ’s own FBI analyst’s badge may clash with his dad’s trademark leather coat, there’s no denying family. Besides, Shaft’s got an agenda of his own, and a score to settle that’s professional and personal.  Source:  IMDB.

Details:   Avan Jogia has been cast in New Line’s reboot of Shaft. He joins previously announced cast members Samuel L. Jackson, Jessie T. Usher, Regina Hall, Alexandra Shipp and Richard Roundtree.  Tim Story will direct a script from Kenya Barris and Alex Barnow which will follow a nerdy FBI agent who launches his own investigation after his friend dies under suspicious circumstances. Needing help with the case, he reluctantly enlists the help from his estranged father — the legendary, stuck-in-the-80s-but-still-cool-as-hell titular John Shaft.

New Line and Netflix are partnering on this film with Netflix financing more than half the film’s high $30M budget for international rights and will stream Shaft outside of the U.S. after New Line releases it theatrically domestically.

Back in 1971, Gordon Parks helmed the now-classic blaxploitation film Shaft, starring Richard Roundtree as John Shaft, the black private dick who’s a sex machine to all the chicks. The film spawned a few sequels, and then in 2000, John Singleton directed a remake starring Samuel L. Jackson in the title role. The Singleton/Jackson version went light on the lady killer aspects of the original, and instead focused on a murder mystery.  Source(s):  Slash Film; Deadline.  Photo Source:  Movieweb.