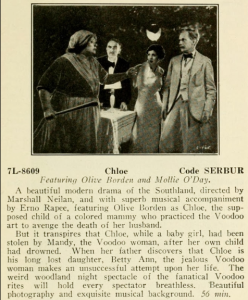 Mandy, a voodoo practicing nursemaid, returns to the swamps of the Everglades with her half-white daughter Chloe and helper, Jim Strong, to exact revenge on Colonel Gordon, the man she believes is responsible for the lynching of her husband Sam fifteen years earlier. The widowed colonel, whose daughter Betty Ann drowned in the swamps around the same time that Sam was killed, lives with his niece Joyce and oversees the family turpentine factory.  As Chloe, Mandy and Jim near the colonel’s home, Chloe expresses doubts about her Black heritage and rejects the proposal of the devoted Jim.

Wade Carson, the new “Yankee” foreman of the turpentine factory, meanwhile, impresses the colonel when he discovers shortages at the factory and establishes that Mose, one of the employees, has been stealing from the company. After Wade fires Mose, Mose swears revenge and then tries to force his attentions on Chloe. Wade comes to Chloe’s rescue, however, further aggravating Mose and Mose prepares to shoot Wade but is stopped by Joe, who is then crushed to see Wade walk Chloe home.

Later, while Mandy and Mose join forces and plan their voodoo revenge, Chloe and Jim argue about Chloe’s attraction to the “white northerner.”  Then, on the anniversary of Betty Ann’s disappearance, Mandy leaves voodoo switches on the colonel’s doorstep and initiates a drum-beating ceremony. During the ceremony, Mandy, who is also concerned about Chloe’s interest in Wade, drugs her tea and orders Jim to take advantage of her subsequent stupor to assure their marriage.  Jim refuses to seduce Chloe, but after seeing Wade kiss Chloe, he confronts Wade and tells him that she is half-Black and therefore “off-limits.”  Although Wade is reluctant to believe Jim about Chloe, he takes seriously his warning that Mandy and Mose are plotting against him and the colonel.

The Colonel and Wade then break into Mandy’s cabin and there discover clothes that Betty Ann was wearing the day she drowned. When Chloe identifies the clothes as ones she wore as a child, the colonel becomes convinced she is his daughter. Mandy, however, denies that she kidnapped Chloe to replace her own dead child, and the colonel’s niece, Joyce, who is attracted to Wade, also expresses doubts about Chloe’s white parentage.

At a party in her honor, a confused and distraught Chloe flees into the swamps, while the colonel and Wade, determined to prove their hunch, send the local doctor to dig up a grave that the colonel believes contains Mandy’s black baby. Meanwhile Mose ambushes Chloe in the swamp and brings her to Mandy’s voodoo ceremony, where they plan to sacrifice her.

Wade and the colonel, however, arrive in time to save Chloe, after which the doctor confirms that the baby buried at Mandy’s house is black. At last assured of her “whiteness,” Chloe is free to pursue her romance with Wade.

Ohio banned the movie as “harmful.”  White actress Olive Borden plays Chloe, who is trying to avenge her Black father’s lynching but along the way falls in love with a White man who works for Col. Gordon, the rich factory owner who orchestrated the killing.  Later she discovers that Gordon is her biological father and that she is white.  The lynching, though not shown in the film, may have factored into Chloe’s censorship.  But the narrative twists trick audiences into believing she is black and then insists (on a string of unstable evidence – most notably, the dress she wore as a child) that she is white and can marry a white man.  Chloe was unlike Imitation of Life in that it admitted interracial desire and sex:  it accepted (perhaps because of its New Orleans setting) the premise of a half-caste “creole” Negro and allowed both Black and White suitors to pursue Chloe.