Moments after the wedding of Bob and Eleanor Lindsay, Dr. Helen Jackson, a wealthy old recluse who knew Eleanor’s parents, has her lawyer Bradshaw draw up her will, leaving her fortune and gloomy house to the newlyweds. 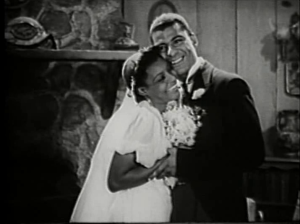 While the wedding reception is in full swing, Helen, observes the festivities through a window.  When she arrives home, she finds her criminal brother Zeno waiting for her.  Helen rings an Oriental gong, which summons a strange ape-man she calls N’Gina who she’d

brought back from Africa while doing missionary work.  N’Gina frightens Zeno away.

That night, Helen concocts a potion for an experiment, but N’Gina drinks it and becomes so enraged he kills her. Bob and Eleanor find Helen’s body, and because they are named as the beneficiaries in her will, they are initially suspected of her murder. Eventually they are acquitted of the crime, and move into Helen’s manor, where Eleanor soon discovers that food is mysteriously disappearing.  Bradshaw, the executor of Helen’s will, tries to convince them to sell the house.  Later while Bradshaw rummages through a desk hunting for $20,000 in gold which it is believed Helen had hidden in the house, he carelessly rings the gong, summoning N’Gina from his hiding place in the cellar.  N’Gina brutally kills Bradshaw.

Nelson, the detective assigned to the case, moves into the home.  Zeno breaks in to steal Helen’s gold but N’Gina catches him, kills him and drags Zeno’s body upstairs to Nelson’s room.  The creature then captures Eleanor and takes her to the cellar.  When Nelson wakes up and sees Zeno’s body, his shouts awaken Bob, who then begins to search for Eleanor. 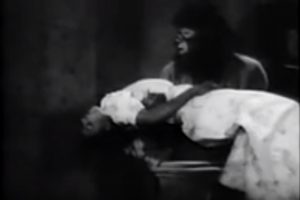 N’Gina accidentally starts a fire, and Eleanor’s screams draw Bob to the basement. Bob locks the beast in a cell, and as the house and N’Gina go up in flames Bob and Eleanor escape unharmed while Nelson emerges from the shrubbery with the gold.

The first science fiction horror film to feature an all-black cast.  The movie was written by Spencer Williams based on his own short story, House of Horror.