Details:  It follows a period in the life of fictional jazz trumpeter Bleek Gilliam (played by Washington) as a series of bad decisions result in his jeopardizing both his relationships and his playing career. The film focuses on themes of friendship, loyalty, honesty, cause-and-effect, and ultimately salvation. It features the music of the Branford Marsalis quartet and Terence Blanchard on trumpet, who also plays for the Bleek Gilliam character. 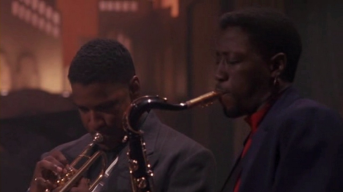 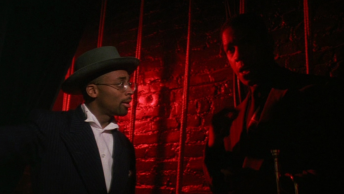 Story:  Brooklyn, New York in 1969. A group of boys walk up to Bleek Gilliam’s brownstone and ask him to play baseball with them. Bleek’s mother insists that he continue his trumpet lesson. His father is concerned that Bleek will grow up to be a sissy, and a family argument ensues. Bleek continues playing his trumpet, and his friends go away.
Over twenty years later, an adult Bleek performs on the trumpet at a busy nightclub with his jazz band, The Bleek Quintet. Giant, the band’s manager, advises Bleek to stop allowing his saxophone player Shadow Henderson to grandstand with long solos.

The next morning Bleek wakes up with his girlfriend, Indigo Downes. She leaves to go to class, while he meets his father for a game of catch, telling him that while he likes Indigo, he likes other women too and is not ready to make a commitment. Later in the day while he is practicing, another woman named Clarke Bentancourt visits him. She suggests that he fire Giant as manager; he suggests that they make love (which he refers to as “mo’ better”). She bites his lip and he becomes upset about it, saying, “I make my living with my lips.”

Giant meets with his bookie to place bets. He meets Bleek at the club with the rest of the band, except for the pianist, Left Hand Lacey, who arrives late with his French girlfriend and is scolded by Giant. Later Giant goes to the club owners’ office, points out how busy the club has been since Bleek and his band began playing there, and unsuccessfully attempts to renegotiate their contract. Giant meets his bookie the next morning, who is concerned that Giant is getting too deep in debt. Giant shrugs it off, and places several new bets. He then stops at Shadow’s home to drop off a record. Shadow confides in him that he is cheating on his girlfriend. This leads to the next scene where Bleek is in bed with Clarke, and she asks him to let her sing a number at the club with his band. He declines her request.

Bleek and Giant fend off requests from the other members of the band for a raise due to the band’s success. Bleek asks the club owners for more money, which they refuse, reminding him that it was Giant who locked him into the current deal. That night both Clarke and Indigo come to the club to see Bleek. They are wearing the same style dress, which Bleek had purchased for them both. Bleek attempts to work it out with each girl, but they are both upset with him, and though he sleeps with them each again, they leave him (after he calls each of them by the other’s name). However, tension rises with Shadow who has feelings for Clarke.

Bleek and Giant go for a bike ride, where Bleek insists that Giant do a better job managing. Giant promises to do so, and then asks Bleek for a loan to pay his gambling debts. Bleek declines, and later Giant is apprehended by two loan sharks who demand payment. Giant can’t pay and gets his fingers broken. Later Giant tells Bleek that he injured himself, but Bleek doesn’t believe him. Giant asks the other band members for money, and Left loans him five hundred dollars. When loan sharks stake out Giant’s home, he goes to Bleek for a place to stay. Bleek agrees to help him raise the money but fires him as manager.

Bleek misses both Indigo and Clarke, but Clarke has begun a new relationship with Shadow. Bleek finds out about it and fires Shadow. The loan sharks find Giant at the club, take him outside, and beat him while Bleek plays. Bleek goes to intervene and gets beaten up as wel l. Additionally, one loan shark takes Bleek’s trumpet and smacks him across the face with it. This permanently injures his lip, making him unable to play the trumpet.

Months later, Bleek reunites with Giant, who has gotten a job as a doorman and has stopped gambling. He drops in to see Shadow and Clarke, who are now performing together with the rest of Bleek’s former band. Shadow invites him on stage, and they play together. Bleek still has scars on his lips and is unable to play well. He walks off the stage, gives his trumpet to Giant, and goes directly to Indigo’s house. She is angry with him because he hasn’t contacted her in over a year. She agrees to take him back when he begs her to save his life.

A montage flashes through their wedding, the birth of their son, Miles, and Bleek teaching Miles to play the trumpet. In the final scene, Miles is ten years old and wants to go outside to play with his friends but Indigo wants him to finish his trumpet lessons. However, unlike in the opening scene, Bleek relents and allows his son go play with friends. Source(s): Wikipedia; IMDB.