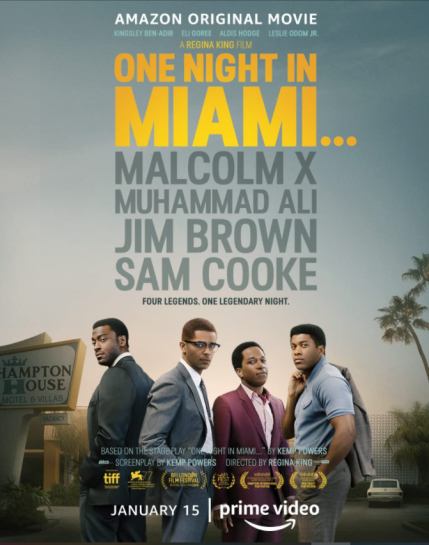 Story:  Set on the night of February 25, 1964, the story follows a young Cassius Clay (before he became Muhammad Ali) (played by Eli Goree) as he emerges from the Miami Beach Convention Center as the new World Heavyweight Boxing Champion. Against all odds, he defeated Sonny Liston and shocked the sports world. While crowds of people swarm Miami Beach to celebrate the match, Clay – unable to stay on the island because of Jim Crow-era segregation laws – instead spends the night at the Hampton House Motel in one of Miami’s historically black neighborhoods celebrating with three of his closest friends: activist Malcolm X (played by Kingsley Ben-Adir), singer Sam Cooke (played by Leslie Odom Jr.) and football star Jim Brown (played by Aldis Hodge). The next morning, the four men emerge determined to define a new world for themselves and their people.  Source:  IMDB.