Story:  Meagan Holder (“Pitch”) stars in this family-centric holiday story as Chloe, an Atlanta-based chef at a fine dining restaurant who gets fired just weeks before Christmas and reluctantly takes a job with pro baseball player Donovan Jackson (Lamman Rucker), who is a single dad of three needing a live-in-chef to get him through the holidays with the kids. Chloe only takes the job in order to save up enough capital to live out her dream of opening her own restaurant, but soon finds herself caught up in the ups and downs of the Jackson family during her residency. Throughout the holiday season in the Jackson household the importance of family and Chloe’s good Southern cooking are two constants that remain. As Christmas comes to an end, Chloe discovers that her lifelong dream might finally come true… and that her heart has a mind of its own.  Source:  Black Film & TV.

Both Eli and Michael are outsiders from radically different backgrounds forced to work together inside the pressure cooker of medical school in the turbulent 1960s.  At odds from the very moment they meet, Eli and Michael not only clash with each other, they battle the indecipherable mysteries of medicine, two warring professors, and a student body warily distrustful of both of them.  Ultimately, it is upon the anvil of riot and revolution on the day of Dr. King’s assassination, that each must answer the question that has haunted them from the beginning: is a physician, a healer, in service of self, or is their true calling “Service to Man?”

Story:  A former military expert is blackmailed into becoming a hit man. He has to do everything in his power to escape special ops to get his life back. Source(s): IMDB, Movie.info.  Photo source:  Tracthertrailher.com. 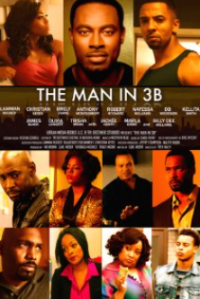 Story:  The story follows Daryl Graham who has just moved into a Jamaica, Queens apartment building. His neighbors – male and female alike – can’t stop talking about him. He quickly becomes intertwined in each of the tenants’ lives and things seem to be going well, but when a murder happens in the building everyone becomes a prime suspect. The movie is based on the New York Times bestselling novel The Man In 3B by Carl Weber. Source(s): Monsters and Critics; PAFF.org.

Story:  When a man finds a woman, who seeks a man, he only gets one chance at a First Impression…or does he?

First Impression is a romantic comedy that takes you on an enchanting journey into the complex world of Internet dating.

Completely unaware of their secret fantasy relationship in cyberspace, a twist of fate brings the real Vernon and Imani together where the pair hit it off instantly.

But when the truth of who they really are is revealed in a bizarre trail of events, the game-changing question is: Can there ever really be a second chance at a “First Impression”? (Source(s): Facebook Page; firstimpressionmovie.com; IMDB).

Story:  It is the one-year anniversary of the talk show Where’s The Love? hosted by married relationship experts and doctors Sebastian (Lamman Rucker) and Ryan Reid (Denise Boutté). They are in their mid-30s, great looking and have a successful counseling practice complete with best-selling books and an Emmy®-nominated TV show.

Ryan and Sebastian seem to have it all, but secretly their relationship is falling apart. They’ve been keeping up appearances to Sebastian’s sister Kai (Terri J. Vaughn) and her husband Rod (Darian “Big Tigger” Morgan), Ryan’s best friend Sidney (David Banner), their producer Paige (Nicole Eggert), Ryan’s editor Dale (Karon Joseph Riley), their patients, their fans and the public to save their lucrative careers – until one day when it all comes out.

Now, Ryan and Sebastian have to decide whether their own marriage can be saved. (Sources: UP TV; IMDB).