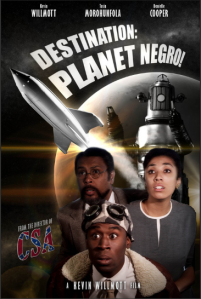 Story:   Destination: Planet Negro! follows influential African American figures, W.E.B DuBois and George Washington Carver, as they time warp to the present to discover unbelievable developments. It all starts when a group of black leaders during the 1930s gather for a secret meeting to discuss the “Negro Problem” in America at the time, when they decide that the only real solution is for black people to, not only leave America, but the planet altogether.  They build a rocket ship that they plan to use to take an exploratory group to Mars, to research the possibility of such a bold undertaking.  Carrying a crew of three, the spacecraft vaults into a time warp, landing its brave scientists in present day America.  A smart satire that sports a wicked streak of goofball humor, Destination: Planet Negro! has the feel of low-budget 1950s sci-fi, and when the crew find themselves in a contemporary Midwestern metropolis, this comedy takes on the look of a reality show as the astonished adventurers discover unbelievable developments like young men with drooping pants and the election of a black president.  Source(s):  Official site – Planetnegro.com; Shadow and Act.