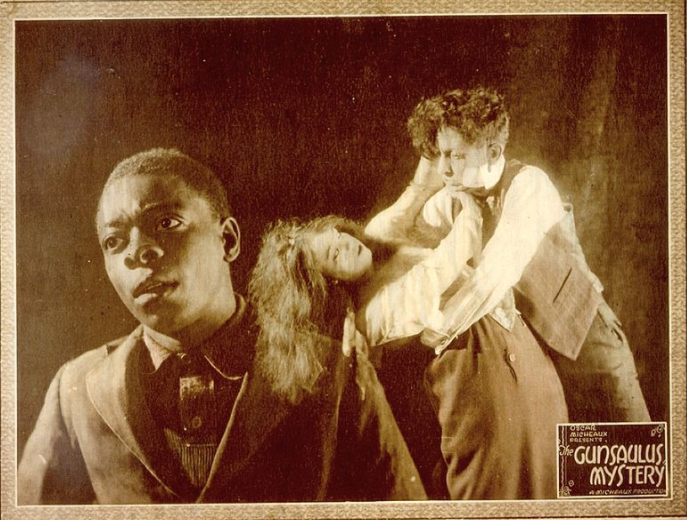 Synopsis
Myrtle Gunsaulus, a young African-American girl, is found murdered in the basement of a New York City factory by Arthur Gilpin, the black janitor.  Gilpin is charged with the murder and arrested.  His sister, Ida May, hires her former boyfriend, defense attorney Sidney Wyeth, to represent him.  During the sensational trial, Wyeth is able to prove Arthur’s innocence.  Janitor Lem Hawkins makes a confession which implicates the sexually perverted white superintendent and general manager of the factory.   The Gunsaulus Mystery was inspired by the trial of Leo Frank for the murder of Mary Phagan in which Frank, a white factory foreman, threatened a black janitor into helping him dispose of his young, female victim.

Notes
According to an unidentified news item from the African-American newspaper Chicago Defender, “the story is built around and about the famous Leo M. Frank trial which took place in Georgia some years ago…in which a member of the Jewish race was convicted of the murder of a young factory girl on the alleged confession of one of ‘our folks,’ who was employed by the same firm.”  A Chicago Defender ad for the film states that filmmaker Oscar Micheaux was in the courtroom during the Frank trial.  After Frank was sentenced to death, Georgia Governor John M. Slaton issued a stay of execution, but Frank was lynched by a mob after Slaton commuted his sentence to life imprisonment.

Micheaux revisited the subject again in 1935 with a sound remake, which was released under the titles Murder in Harlem, a/k/a Brand of Cain a/k/a Lem Hawkins’ Confession. Especially in this version, Micheaux used the conventions of the detective story to introduce differing narratives and rework the binary nature of the trial, in which an African-American man and Jewish-American man had testified against each other.

This film is considered lost.