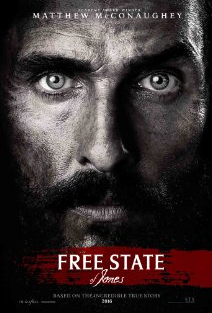 Details:  The plot is based on the true story of Newton Knight (Matthew McConaughey), a Southern farmer who fell in love with a slave named Rachel (Gugu Mbatha-Raw). This relationship lead him to rebel against the Confederate Army. Actress Keri Russell is set to play Newton’s wife Serena, while Mahershala Ali is portraying Moses Washington, an escaped slave who becomes Newton’s ally in his fight to secede from the Confederacy. Source(s): Movieweb, IMDB.  Photo source: IMDB.

3 replies to The Free State of Jones